On a calm yet windy early evening in South London; sounds of music and laughter can be heard from afar in the SE15 district. Noises of children running around, Afrobeats, people driving on their way to or from respective community events and traffic on the main roads remind of familiar sight of Queens Road in Peckham.

However, rather than attending another Nigerian, Ghanaian or Congolese event; a very small but growing African community was in town and is in town calling London and the UK it’s home. After receiving a warm invite from Mr. Wilfired Wiley (pictured above, on the left) on behalf of the Malian Community. All Malians were invited. I also came along; and the rest as they say’ was history.

London’s Francophone African Community has often been dominated by Cameroonian, Ivorians and Congolese. In the last year however, whilst Gabonese and Guineans have been discovered in small pockets across the UK capital over the past five years; it’s the Malian community that I caught up with last week in South East London. The ambiance, colourful dresses, smiles and food was great and the dances, chivalry and lauaghter was clearly evident on show. Mali’s independence day falls on September 22; and earlier in the same month is the Tabaski celebration. ‘Tabaski’ is Mali and Senegal’s regional word for ‘Eid al-Adha’ (Festival of the Sacrifice), also called the “Sacrifice Feast”, which is the second of two Muslim holidays celebrated worldwide each year, and considered the holier of the two.

Usually on this occasion in Mali; everything is closed and the festivities can last several days if the date corresponds with the proximity of a weekend. This depends on the lunar calendar. Whilst London’s night life scene and traffic on the way certainly wasn’t brought to closure on the night; the presence of beautiful tunics and other outfits (new) that are all Muslims wear on these festive days when traveling with friends to eat sheep reminded me of my native Niger Republic & Nigeria. The aura was ‘brotherly’ evident from our west African neighbors on this Saturday night.

Music From Ali Farka Touré, Oumou Sangaré, Safi Diabete amongst others was played on the night. Bissau is a juice made with the hibiscus plant. Good Food, Colourful attire and my first tasting of the bissap drink was quite remarkable. This was a joint event organised by 2 Malian Associations in the UK: Benkan association, mainly based in Birmingham and beyond and Benso Solidarité , headed by Mr. Wilfired Wiley.

Sighting of the traditional ‘Balani’ dance where the men gather on one side and the women on another in reference to the melody played by the balafon was performed in the rural manner. “This is the way we dance it.” Mr. Wilfred Willey made me aware – and rightly so. Balani refers to the southern Malian dance style of balafon usually played by an orchestra including drummers, that usually ends in a frenzied yet joyful breakdown. This is the music most associated with the Senufo and Minyanka, rather than the Mande (Bambara and Malinke) but can be seen throughout the south of the country.

“For those that are not in the know; the Malian community is small but growing. Whilst numbers officially and unofficially assume there are no more than 500 based in the UK; most Malians are based in South and South East London, with the second largest population found in Birmingham and area. The close knit community; though often reserved and conservative are well-organised and celebratory when it comes to national events and this was evident on the night.” 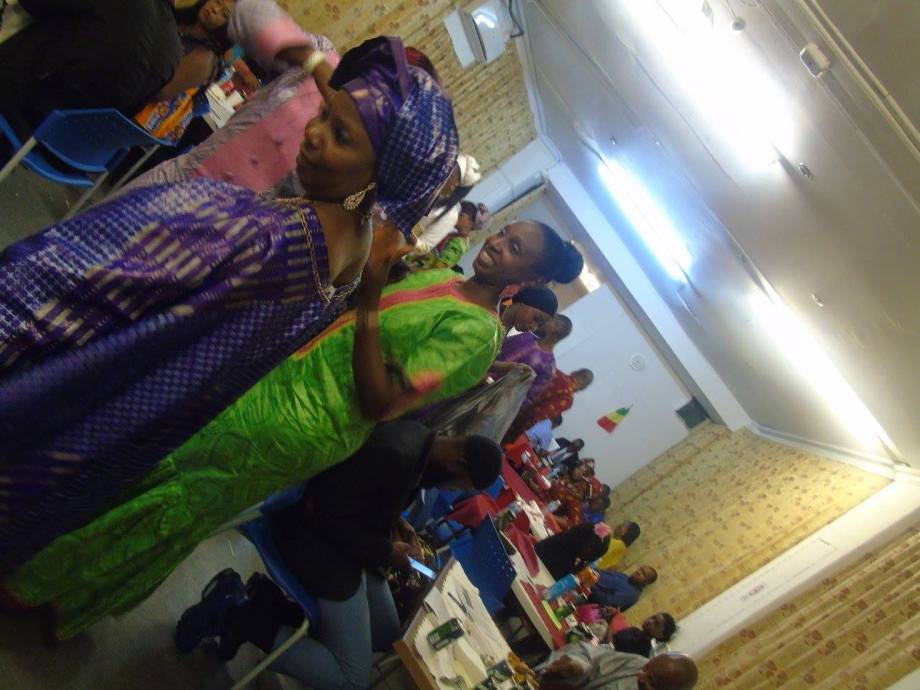 At the start of the event; children played around as various games and activities were laid out for them as guests started to pour in. The official part started around 8pm. We had speeches by Mr. Wilfred Willey, the president and a representative of the other associations from Birmingham. Two guests from Paris, came especially to promote an insurance policy for Malian expats (living abroad and seeking to return home) and the other was a housing development project back home in Mali. The Malian national anthem was sung in French and Bambara. The party started. Food and drinks followed. Dances galore. And this little blog post was created as a result of their hospitality to me.

Whether it’s information on the Best 50+ African Tailors, Fashion Designers & Seamstresses;  Ghanaian Restaurants; African Wedding Photographers; Nigerian Restaurants and Food Pop-ups; Black British Cake Bakers, African Catering Companies in London. Or info on African migrants living in Bucharest, Valencia, Athens. Or Info on London’s Diverse and rather unknown African Communities of Nigeriens, Ivorians, Malians, Gabonese, Congolese, Angolans, Somali, Ghanaians, South Sudanese and more. Or info about some of the dilemmas of International Students in the UK and even organisations that aid UK-based African International Students; we have it here on AfricanCultureBlog. Fresh local content on the UK and London’s Diverse African Community is available on this blog.